I was approved for a green card today!

We all had to get to the Department of Homeland Security in central Phoenix for 7.15am so I assumed we'd be there all day being grilled over every last detail of our relationship. Instead, the whole thing can't have taken more than an hour. Heather was sure that the sleeping baby in a travel seat melted the heart of the gangling civil servant as we sat in an office small enough to be one of his shoe boxes. I think the two inch-thick wad of paperwork played its part.

Tomorrow is ram-packed full of job interviews and doctor's appointments. Heather's best friend Kristi is in town for the rest of the week so the hard stuff is nearly behind us now. Fingers crossed.

Have you had your fix of baby photos yet? Yes? Well tough luck. Here's Owain sleeping in his crib on the blanket that Auntie Dee Dee made for him. Aahhh! 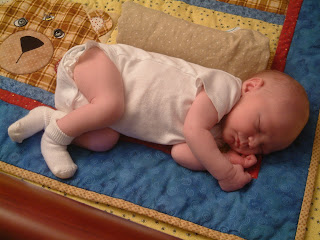 And who's this hansome, young man asleep in his swing-chair-type thing? Could it be Owain Rockford? Why yes! 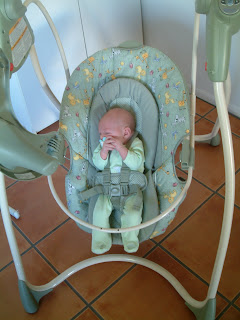 Green is clearly the new black (except in his diaper where it's the other way around).
Posted by John McFarlane at 16:05