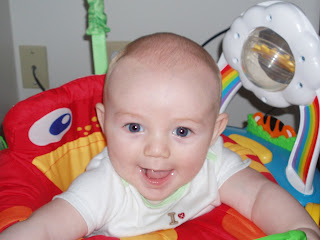 Today was Owain's 4 month check-up at the pediatrician's. Here are the new stats: Height-26 1/2 inches (90th-95th percentile), Weight-18lbs (95th percentile), Head circumference-43.6cm (80th percentile). He is on target with all milestones including grabbing and holding objects, my hair always and whatever glass I'm drinking out of, squealing with delight, it sounds like he's trying to communicate with dolphins or Mariah Carey, he's discovered his tongue and is constantly sticking it out, he also recognizes John and I now and gets a little separation anxiety. The one thing he's not doing is rolling over but the doc explained that big babies take a little while longer to do this. I think it's kind of funny that he's too fat to roll his big butt over. The most enjoyable new thing he's doing is laughing. John can make him hysterical by propping him up on the couch and then putting a pillow on his belly he then beats on it like a drum and the kid goes wild. What a weird sense of humor, wonder where he got that? He also received more immunizations today ugh! At least the nurse warmed up her hands before touching him this time and he only cried for a minute. 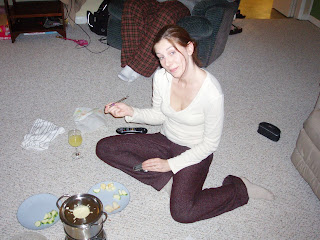 I hope you don't mind me putting up this picture Kristi! I returned from my trip to see Kristi and her family on Tuesday. In the photo you can see the pot of gorgeous cheese fondue that we totally pigged out on while watching the Oscars. I found the program pretty good this year. John Stewart made a good host and the highlight for me was Marion Cotillard winning for Best Actress and giving a charming acceptance speech. The director, "rocked her life" and she was"full of joy, sparkles, and fireworks" To give her credit I think she only learned English in the past year. Kristi's children, Emerson 4 1/2, and Isaiah 16 months were just adorable and they both were pretty enamoured with Owain. Emerson was very conscientious about keeping him happy, always bringing toys to him and singing songs and making funny faces to make him smile and Isaiah actually kissed him on the head! And tried to climb into the carseat with him haha. To my shame I have no pictures of those cute kids, well, about 7 of Emerson turning her face away from the camera. All in all it was a good trip. Owain slept between 9 and 10 hours a night while we were there, which is the longest he has EVER slept and I got to spend some quality time with my best gal who I miss already!

Heather has just finished watching the Oscars 'round Kristi's house in Alabama. I've been left in charge of the family estate here in Washington and have really let my hair down.

On Friday night I watched two episodes of Dr Who back to back over a glass of whisky... and not modern Dr Who neither - good old Tom Baker on PBS. Nobody tutted at the dated special effects and I didn't hear a single bitchy comment about the Doctor's glamorous assistant Leela. Her outfit is made of shammy leathers and she has some great lines.

On Saturday I went to work for a few hours and played Team Fortress 2. Then I tried to go see a film at the IMAX and failed. Normally, I wouldn't even try so that's adventurous right there. Instead I went home, ate pizza and watched Dog Day Afternoon. It's a very funny movie.

Today, I just went into total off-the-leash overdrive. I watched all sorts of lads TV including an episode of Star Trek from 1967. I vacuumed and washed up. I took out the recycling and the rubbish and wired up the DVD player. Then I went grocery shopping and bought the ingredients for my first ever curry. Unfortunately, I got bored while it was cooking and started eating red chilli peppers to remind myself which bits have the hot stuff. I'll leave out the gory details. Lets just say I needed a bath to fully recover.

And still I managed to post some baby photos. This is from our wanderings around Ballard last weekend and just happen to have some obnoxiously adorable pictures.

Posted by John McFarlane at 21:46 No comments:

You'll be glad to hear that I survived my nasty cold from a few weeks ago. I've been back to work for a week. On Friday I went on a company jolly to a ski resort at a place called Snoqualmie which was nice. Look: 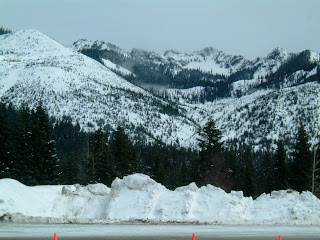 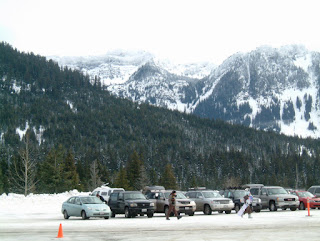 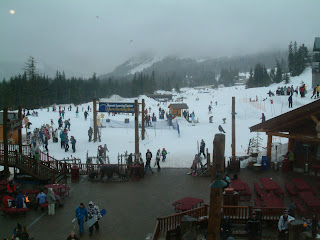 Also, it's rather old news now but in case you were wondering what game we've been working on at Surreal, it's official: This Is Vegas!

Visit to the Space Needle 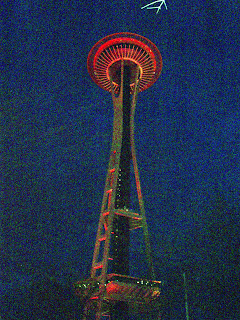 This is what happens when you try and take a picture of a large object at night with a puny flash and then mess with it with neato effects in Picasa. Who knew the space needle could look even more futuristic? We finally made the 46 second ride up the elevator in the needle last Sunday. It was actually kind of cool. I loved the 360 degrees of gift shopping. I had to wrench myself away from the needle shaped pepper grinder and the mini-flask key chain with needle logo etc.
I am once again blogging in place of John but instead of Radioshack keeping him from his duty it's a terrible "itis" of some sort. The doctor had a name for it but I can't remember. She prescribed Vicodin for his throat pain and wrote a note keeping him home from work for the week. Knock on wood, Owain hasn't come down with the cold I had in Arizona or the funk that John has. 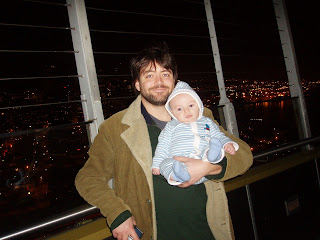 Here's John and Owain inside the space needle 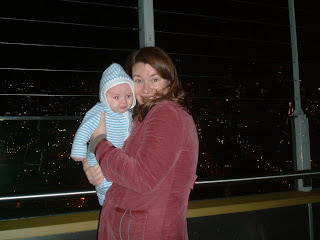 And one of me and the kid

Posted by heather mcfarlane at 17:42 No comments: