I saw a funny film yesterday and a totally different funny film the day before. It's like the opposite of déjà vu only it's real!

On Monday we finally made it to see Superbad. I've now seen three films this year with Seth Rogen in the acting and producing credits. He really needs to put his feet up, buy an island somewhere and give somebody else a go.

Superbad passes the comedy test. I laughed out loud for most of the film, despite a slow beginning which I just assumed was a fast beginning to an unfunny movie. Ostensibly, it's a buddy film about two desperate virgins about to graduate from high-school and head off to separate colleges. Their plans to get laid involve acquiring alcohol which in turn involves their even bigger loser friend, Fogell and his brand-new fake id.

Fogell enters a liqueur store with $100 dollars and a shopping list and out comes the best what-if comedy situation I've seen in a in a long, long time. I'll leave it at that. Very funny.

Yesterday we made it to the Camelview 5 which is a special place where Harkins hides all the films that aren't very profitable just in case it's infectious. It was the only place in the valley - possibly in Arizona - showing Death at a Funeral, a British comedy that should be easier to sum up.

It's basically a carefully crafted English farce with all the appropriate ingredients: an emotionally incompetent family full of sparring siblings, grumpy, judgemental patriarchs and general fuck-ups all reunite for a stressful social situation they'd rather avoid. But while there's plenty of dashing about, misdirection of vicars and the obligatory manhandling of dead bodies, there are also some satisfyingly adult touches such as hard drugs, blackmailing dwarfs and our old friend, 'you've missed a bit.'

I won't say what it's a bit of. It could put you off seeing it and that would be a shame. (If you can find it that is.)
Posted by John McFarlane at 23:17 No comments:

Late last week, in a fit of boredom, I wrote a program to produce lottery numbers. The idea behind the program is that if the numbers are as random as possible and we win the jackpot we're slightly less likely to have to share it with anyone. (I think the logic is correct although I never completed my Stats A-level so I can't be sure.)

We used it to pick numbers in Saturday's lottery and guess what, we won ... $21!! Including Mac's contribution, we bet $10 but that's still over a 100% profit. I have high expectations of winning the $15,000,000 jackpot on Wednesday. If it comes through for us, expect a posting here by the guy I hire to write my blog for me.

I put the program on my site and then decided the site needed an overhaul and that's mostly what I've been doing ever since. I've got quite proficient at CSS as a result.

Daniel and Jim came to visit on Saturday to drop off the last of the baby shower presents and to get the rest of the stuff on the registry. We now have everything a baby needs plus a tonne of other stuff Heather thinks he needs. She just now remembered he doesn't have a pair of sun glasses.

We've been in Prescott since Wednesday when I got a nasty case of drink poisoning which knocked me out for a day or two. Fortunately I recovered by Saturday for the Baby Shower!

As you can see, it was a non-traditional, men-and-children-invited baby shower. Fortunately there was lots of beer so the kids weren't too much trouble.

I've no idea if baby showers are just an American thing or not. I certainly didn't hear of them until I got here. Basically everybody gives a first-time mother baby stuff. We got tonnes of stuff - much of which is genuinely useful. The rest is stuff that makes Heather and the other mothers go 'Aaaaaahh' a lot.

We're heading back to the valley early tomorrow with most of our new toys. Jim and Daniel are coming to visit in a week or so with whatever we couldn't fit in the car. A batch of new movies came out last Friday and with any luck, they'll push Harry Potter out of the listings so we can go see it with them in IMAX.

In other news, the job hunting is really picking up pace now, with on-site interviews and everything. That's a big deal 'cos everywhere is so far away here.

And finally, here's proof that mum will do anything for a bottle of bubbly (in case you needed it): 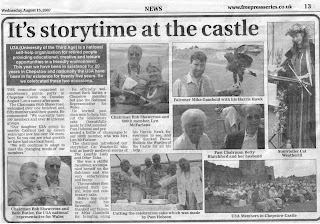 At one time (I can't remember exactly when) I was going to get a job, then we were going to find a home (with cable) and then have a baby. On closer inspection it seems things aren't going to work out that way. My work permit won't arrive in time for us to get all that done before Chuck's grand entrance. Hence the nursery in Mac's spare room.

Heather and I spent last weekend un-flattening flat-packs full of baby furniture. There's a crib, a changing table and a chest of drawers... which is exactly like a grown-up chest of drawers, only with extra safety stickers on it.

Only In Your Super Soaraway Sun!

Today we got our fix of new films at the local Harkins cinemaplex. It's like Odious cinemas in the UK except it's just as naff. In fact the only difference is that the food and drinks are a rip-off at both venues.

Top of the list of films I want to see is Harry Potter and the Order of the Phoenix. The dilemma is that it's available in 3d IMAX. There's an IMAX theatre right next door to Harkins but they have an agreement not to show the same films. This means that I've got to wait until the Harkins stops showing the crappy version before I get to see it in all its glory.

There's another cinema on the other side of Phoenix which claims to be IMAX but it's not; it's just a fairly big screen. We saw 300 there when it came out and it should have been as good as 2001 but instead it was more like 500!

Speaking of 2001, we saw Sunshine today. It's another bleak, claustrophobic piece of hard science fiction set a long way from Earth and it's not shy about giving away its influences. It's reminiscent of Solaris and Event Horizon but it also has a similar apocalyptic slant to recent British films like Children of Men and 28 Weeks Later.

The star of Sunshine is a ship called Icarus 2. Its mission is to drop a bomb the size of Manhattan into the sun to stop it fizzling out. Failure will spell the end of life in the solar system. This overwhelming burden and the fact that the original Icarus disappeared on an identical mission makes the movie an almost painfully tense thriller from the start. (Spoiler alert: the mission doesn't go smoothly.)

The other film we saw was The Simpsons Movie. This is just a great big episode of the TV show. It's OK if you like that sort of thing. I like that sort of thing and found it OK which proves my point. By the way, it's not available on IMAX so rush out and see it now. You'll make an old man - who's just become $5bn poorer - very happy.
Posted by John McFarlane at 00:23 1 comment: