We spent last weekend in Strawberry celebrating our friend, Aly's birthday. Mary Ellen has a holiday house up there which Mac has done up nice and proper. It's got a barbecue, two fridges, a swamp cooler and a TV with composite video input at the front for easy games console installation. Nice.

This week, I've been concentrating on finding work including phone screenings. I'm pretty used to these. They're quickie interviews to weed out the people who sound like Mr Bean. The only difference here is that people actually like Mr Bean so I've been practising all week. I can't do the voice yet but I can change my underpants without taking off my trousers which is almost worth adding to my CV.

Luckily, it's all paid off because my first batch of interviews is lined up! More on this later. First, there's an action-packed week to be had in Prescott. Not only is it the birthday of my new brother-in-law, Daniel, but Prescott has the state's biggest Independence Day celebration on July 4th. For those of you whose attention span is extra specially short, this is another classic example of an American, triumphalist rewrite of history. In this case the aliens loose.

But wait, I've saved the best news for last... my residency application is in! As long as there aren't too many glaring errors in all the forms, I should be allowed to stay after my tourist stamp runs out - at least while the application is processed.

Here's a picture of me going into the post office with more tree in my hands than grows in this valley in a typical year: 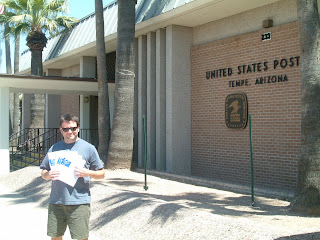 Nestled in there second from the right is an application to work here while the other stuff goes through. This is pretty handy. It can take years for the green card to be issued but I'm allowed to work while it's in the pipeline. All the same, even that permit will probably take a matter of months. (And would you believe about half the paper in the photo is evidence that I can survive here without a job!)

Before I steal all the credit, I ought to point out that Heather McFarlane, Esq. did most of the work. She made sense of all the different forms to be filled out and plenty of them were completed by her, mostly to confirm that I'm not a scrounger. Ha! Other tasks involve writing the processing fee cheques, marrying me and taking the photo (above).
Posted by John McFarlane at 16:21 No comments:

At last, some news

Copies of the marriage certificate have finally arrived. Heather chased them up about a week ago which was a good job because it turned out that they'd been returned undelivered for no particular reason. Now the process of gaining residency and a work permit can begin!

We spent this afternoon in a doctor's waiting room packed full of Mexicans and Asians all waiting to get our medicals. (That's form I-693.) I find out on Thursday if I have any deadly infectious diseases. I was also given (among other things) an MMR jab. I hope I don't get autism. Heather and her Dad have to hunt down their last three years of tax returns to help prove they can support me (in pursuit of I-864 / I-864a). There are plenty of other things the immigration people want to know about me. Did you know for instance that the only two clubs that I can remember being a member of since my 16th birthday are the Venture Scouts and the Scotch Malt Whisky Society.

Yesterday was our one month wedding anniversary. We went to the Melting Pot which serves fondue. It was very nice although rather pricey. We sat in a small booth with an electric hob on the table and dunked chunks of food into very hot pots of cheese, broth and chocolate. The waitress was surprised to hear that I hadn't been to a fondue restaurant before despite being from Europe.

Joe the dog isn't having such a great time. He is having one of his coughing spells which can last for a week or more. I ought to video one of his fits so you can hear how disturbing it sounds.
We've tried taking off his collar and replacing his tap water with filtered water. Heather even shut him in the bath room while we had our showers in the hopes that the steam would help but it didn't.

The baby is kicking so hard now that I can see it. He gets bursts of energy when Heather eats sugary food and freaks out when she has baths. I don't like baths either.
Posted by John McFarlane at 21:25 1 comment:

Nothing much happening here I'm afraid apart from going to see lots of movies at the mall. The best way that we've found to overcome our cinematic differences is to watch two movies at once. This worked well for Grindhouse the other month. Heather enjoys watching women beating up men whereas I prefer heads exploding.

The other week I struck a deal whereby H sat through 28 Weeks Later with me and in return, I watched Waitress. Some of the more stomach churning scenes made her a little queasy, even though she doesn't suffer morning sickness any more. I, on the other hand can sit through anything - even the scene where Jenna gives Dr. Pomatter the really long kiss.

As for 28 Weeks, I won't give the story away by telling you whether or not Robbie Carlyle turns into a frenzied zombie. You know, he's that actor who played Begbie in Trainspotting. No sir. You'll just have to go and see it for yourself. No plot spoilers in this posting.

Incidentally, at the end of Pirates of the Carribean: At Worlds End, Will Turner stabs Davey Jones' heart, thus narrowly avoiding death and in the process becoming the captain of the Flying Dutchman which in turn allows him to release 'Bootstrap' Bill Turner from his curse. It also means that all the fishy pirates from the Dutchman become human again and for a split second, you can actually recognise Dermot, my ex-landlord without his shark head! Then the pirates twat the English navy and sail off.

Other than watching films, I'm still waiting for the official marriage certificate to get here from Nevada which is necessary for all sorts of things from starting the visa process to getting heather's name changed at her bank.

One thing that did arrive after a long and anxious wait was Mario Party 8. We've only played one game so far but it appears to be quite good. The graphics are a big improvement on the Gamecube predecessors. The same cannot be said for Super Paper Mario. I have found this Wii game to be rather dull on account of the lack of turn-based combat. Never thought I'd hear myself saying that. Incidentally, if you ever think of buying WarioWare: Smooth Moves, don't. Rent it. It only takes a couple of hours to complete. Two very funny hours, mind. 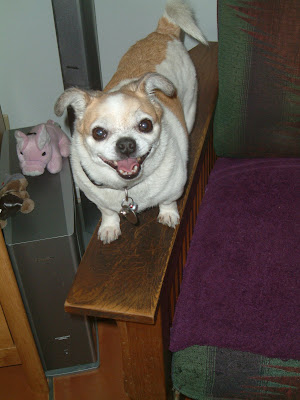