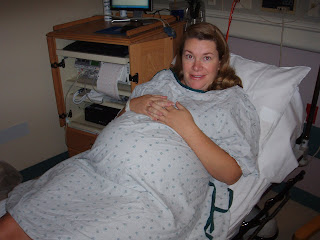 At our ultrasound appointment yesterday, it transpired that the baby's amniotic fluid is low enough to be a cause for concern. We were checked straight into the hospital at around five and at about 8:30pm, Heather was administered Cervidil, a mild labour-inducing treatment that is applied directly to the cervix and aims to ripen it.
At 8.30 this morning, it was removed after causing only mild contractions and Heather was moved on to Oxytocin, a drip-based drug that promotes contractions. All afternoon, Heather had increasingly intense contractions and dilated to roughly 4cm.
At around five, the pain got too much and she opted for an epidural which was immediately followed by a great feeling of relief as well as uncontrollable shakes which the nurses and anesthetist assured us was a sign of intensifying labour. She was then given a sedative to calm her down which just plain tripped her out.
Sorry for the overly medical account of our adventures in childbirth which probably involves plenty of factual errors. I've probably had four hours sleep since Monday morning and Heather's had less than that. It's been a very emotional time with a lot worry and stress and more than a little disillusionment on Heather's part. She's been through a huge amount of confusion and pain but is currently comfortable and calm ... and mostly numb from the waist down!
We're getting a crash course in hospital politics which is very interesting. A big problem is that we've out-lasted roughly six waves of nurses and doctors, each with a varying opinion on how to deliver babies. This means that we find ourselves changing course regularly. (It's a bit like party politics in that respect.)
Currently we're just waiting to see if the labour progresses of its own accord before deciding what to do next. Heather can't feel her legs and needs her feet rubbed constantly to stop her freaking out. She's not been able to explain exactly why this is but is very adamant about it.
It's quite hard to keep sight of the end goal at the moment as our time is filled with monitors, medicines, pillows and uncomfortable lying positions. We've had visits from Jamie and Gwyn as well as Mac and Mary Ellen who kindly lent me the laptop I'm using right now to get on the web. Jim and Daniel are currently keeping us company. Daniel is alternating between smoking and snoring and Jim is on foot rubbing duty while I write these words. 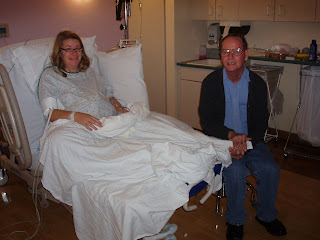 More news as it happens...
Posted by John McFarlane at 22:19