Ok, here are most of my Brighton photos.

On Monday I mostly just chilled out and played on my laptop during the day and then went to the Barley Mow with Lionel, Chris, Richie and Tom and then later to The Golden Cannon, The Sidewinder, The Bulldog and finally the Market Diner:

On Tuesday, I wandered up London Road, through North Laine and the Pavilion Gardens.

In the evening I hung out with Max and Tom. In all that day I managed to stop off for drinks at The Rose Hill Tavern, The Basketmaker's Arms, the Earth and Stars and the Barley Mow. Phew!

On Wednesday I did some shopping - a coffee mug to be precise after which I was exhausted and had to rest in The Quadrant for a few pints. Then Tom cooked some curry and then it was back to the Golden Cannon for a few beers with Richie, Chris, Rae, Tom and Ben.

On Thursday it was time to head home ... via The Trafalgar for one last hair of the dog with some old chums from Kuju.

All in all, a very boozy 6 days. I suppose that it was the closest I'm going to get to a stag party which means that from now on, I'm never going to drink or swear or look at semi-naked table lamps

(except Heather).
Posted by John McFarlane at 09:02 No comments:

I'm back in The Cayo and able to make my little photo albums. Here's the first batch which I took before I got to Brighton (except the last picture). I described most of this stuff in my last post.

More to come in a little while...
Posted by John McFarlane at 17:17 No comments:

Urgh. That last posting doesn't really make much sense in the cold light of day, does it? I shall elaborat a bit.

On Thursday, Mum and Dad headed off for France with the doggies. Spud gets very nervous in the car so I thought I'd give them a nice long walk to tire them out a bit. Hence the photos of the village.

With no way to magic up egg and bacon sandwiches, I decided to head to England to see some of the people I've left behind in the old world. First stop was Guildford for a Friday night drink with Dom. Glen turned up and later, so did Caz. Here's Dom and Caz looking bright and breezy the next morning: 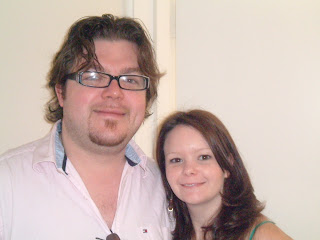 On to London and a Saturday afternoon drink in (among other places) The Crown and Cusion. Here are Marisa and Jeff. (Jeff's the one on the right with the really long arm.) 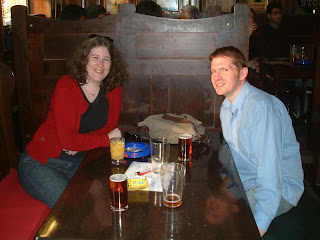 More drinking in the evening with Jeff, an especially drunken transatlantic phone conversation with Heather and another hangover later, I saw the London Marathon. Jeff and Bev and I stood by the side of the road as thirty thousand odd runners pass by. Some were odder than others. Here they are outside their home in Greenwich (Jeff and Bev that is - not 30,000 runners): 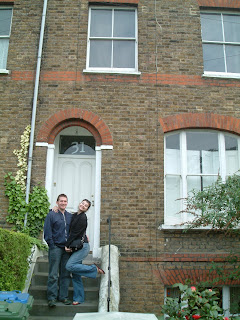 And finally, down to Brighton on Sunday evening and a quick bus journey to the Sidewinder to hear Luke play. He's dangerously good with a guitar. Here are Max and Paul the Jazz Chef: 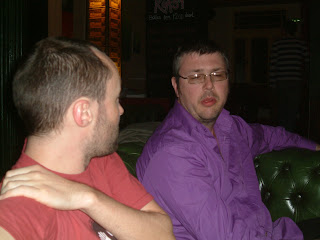 So now it's monday and my hangover's fading. No doubt I'll get up to no good again this evening. Paul is on holiday this week and has kindly let me stay over at his place. He has wi-fi. I like Paul.

In other news, I've been learning a few new tricks to do with teh interweb and redesigned my website. In particular, I've written a php script which allows you to browse my picture galleries much more easilyer. If you keep clicking 'refresh', the pictures change. How do they do that? Using magic!

Unfortunately, I've left my desktop PC at home so I don't have a convenient way to make new galleries so although I've got lots of new photos, I won't publish most of them until I get back to Wales, later in the week.

Now to do more things to write about...
Posted by John McFarlane at 02:47 No comments:

Cripes! It's (once again) been a while since I last posted. I've got plenty of cool pics to post. I went to the London Marathon this morning and hung out with Jeff and Bev and saw Marisa yesterday and now I'm in Brighton for the start of the week. Anyway ... photos.
Posted by John McFarlane at 17:03 No comments:

Things have really hotted up this weekend. That isn't saying much really but I'm not complaining.

On Friday, we went to the Severn View Social Club in Caldicot to see Rob accept a prize on behalf of the Tredegar Arms pool team (RIP).

Unfortunately, the ceremony started a few hours after the start of proceedings and the beer was quite cheap (it being a social club) so it's hardly our fault we were in such a state by the end of the night.

On Saturday, The Barries came to visit. They spent most of the time tormenting the poor dog, look:

Posted by John McFarlane at 14:46 No comments:

Yesterday I learned how to make SVCDs.
Today teh interweb was down for half an hour and I nearly went mad.

Tomorrow I might go to the pub with Rob.
Posted by John McFarlane at 17:04 No comments:

When the old folks go on holiday, I'm expected to mow the field in smart stripes and top up the many bird feeders. But it's only a field and birds don't tell tales.

Posted by John McFarlane at 05:29 No comments:

Well, I survived the flight back to the UK. Many thanks to whoever poked holes in my cardboard box. Stopping only for a couple of pints of Guinness at The Tan House I made it back to The Cayo. I've taken some photos like this one:

In other news, it's about time I mentioned that I'm going to be a dad! I don't know what sex it is yet but it has a heart beat and the doctor assures me that Heather is the mother.
Posted by John McFarlane at 01:59 No comments:

I leave for the UK on Sunday. I'm here without a visa which means I'm only allowed to stay for 90 days as a tourist.

Hopefully, I'll be let back in when I return on the 30th of April. However, I don't know how to explain taking two really long vacations to Arizona in the same year and only spending 24 hours at the Grand Canyon... "Well sir, I just love sun bathing but I really can't stand heights".


Heathrow Terminal 4 here I come!
Posted by John McFarlane at 14:15