If it's been very quiet here in the last few weeks, that's because we've been mentally preparing ourselves for the arrival of my Mum and Dad who flew in on Monday for a week. Heather cooked a sumptuous thanksgiving diner for us this evening. Yesterday, we went to the locks and I let Owain out of his cage for a few minutes. 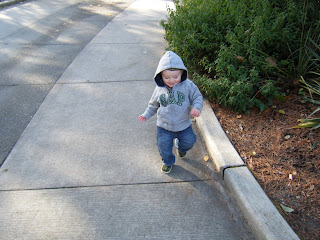 The boy and his grand-paternals have been getting on like a house on fire. Here, Ian passes down a ritual form of torture that I myself remember being subjected to as a child.

We're going to the parade in town tomorrow. It reminded me that it has been a year since we moved in to our flat in Ballard. A year ago tomorrow, we were late meeting with our landlord to sign the contract because we were stuck in traffic in down-town Seattle which in turn was because some bloody parade was going on. Tsk!
Posted by John McFarlane at 21:46 No comments:

For those who are following Owie's growth statistics the latest set of numbers should have you pleased and satisfied for the next three months, I know I am :) Head circumference 48.4 cm (95th percentile), there is a fact-based reason why we call the boy "head", height 31 1/2 inches (90th-95th percentile), weight 24 pounds 8 ounces (75th percentile). He has grown in leaps and bounds during just the last month. He eats well and has made the change from nursing to formula almost entirely. Now I have to switch to cow's milk in a cup. Arg! It's no easy feat getting this kid to drink out of a cup but all the baby books and the pediatrician insist that it must be done in the next 6 months. We'll see.
Posted by heather mcfarlane at 21:30 No comments: 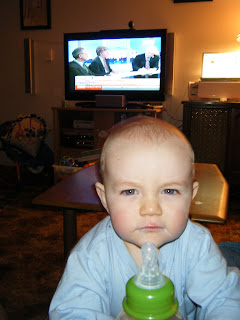 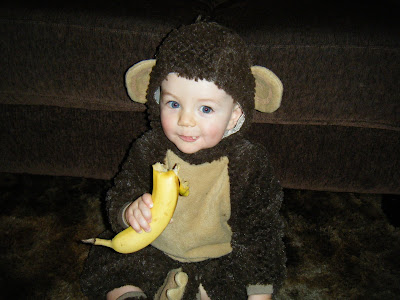 Owie was a monkey this Halloween and what an appropriate costume it was. I gave him the banana as a prop and he gnawed right through the peel and ended up making a slimy mess. I was laughing too hard to do anything about it. 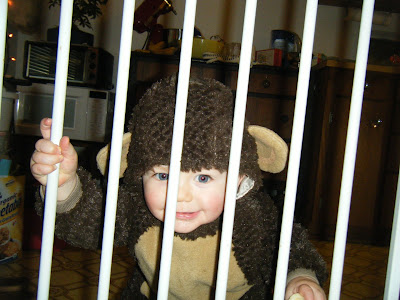 Here is the rest of the Halloween photoshoot.