Yes, the baby has a name!

We couldn't put it off any longer and decided to go with our long-term favourite suggestions. I think he looks like an Owain, don't you?

Owain is a Welsh name which means 'young warrior' or 'well born'. It is pronounced the same as Owen (which is the Anglicised version). 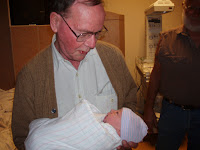 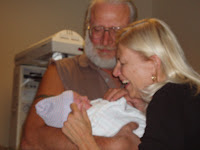 Rockford is an American name meaning 'early adopter of the answer phone'. I was against Rockford for a long time - mostly on the basis that it's not a name (unless you're a town or a TV show). Then I discovered that Rockford is actually a given name. That and my Dad's incessant pleading cause me to cave in and give him Rockford as the middle name.

Actually, I argued with Heather so much over it that she took the rather underhanded approach of making me choose the first name all on my own. This is probably the reason why he's not called Rockford Owain McFarlane. 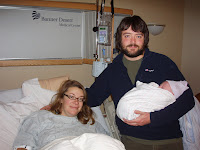 To put the record straight, I dislike 'Rocky' just about as much as I do 'Chuck'. but the important thing is that Heather likes it, a mother's love is more important than a grandfather's.

The local here will be happy with 'Owain', especially because it's spelt correctly, just like the (arguably) last Prince of Wales.

I absolutely love the name. surely he'll be the only Owain in Tempe? Or Arizona for that matter.
Had a skinful for you guys last night, which was quite a sacrifice I can tell you. That kids head is well and truly wetted, if from a distance.