I have a new laptop now so I apparently have no excuse not to blog. The laptop is blue, tiny and super cute plus it has all its keys and a non smashed screen! We've been doing a lot lately and not writing about it so after a while it just becomes a blur. Memorial Day weekend was highly enjoyable with a trip to the zoo and the beach. Owain loves elephants and tries to imitate an elephant trumpeting noise that John makes. It basically sounds like he's blowing raspberries. Very cute! The beach was great, we got there nice and early before the crowds so we nabbed the perfect parking spot and put our towels down close to the hot dog stand. John and Owain went into the water and Owain enjoyed himself tremendously. John and I ended up with sunburns but Owie was fine, of course he wore sunblock and a hat. Funny how we don't give ourselves the same kind of attention. This weekend we had a fairly low key time, just a little shopping at University Village and John took Owain to the park and coffee shop while I was at my pottery class. Yes, that right pottery class, everybody's gettin' ashtrays for Christmas.


Here are the pictures we've taken in the last month or so.
Posted by heather mcfarlane at 21:09 3 comments:

The child is getting to be a handful. He loves to play catch, which is to say I can reliably bounce a ball off his head. It's twice the size he is but he manages to throw it pretty well. Unfortunately, he doesn't know what he can and cannot throw ... and where.

Today, Heather phoned me in tears to tell on him. He'd chucked the TiVo remote control at her laptop and broken the screen. I had to sound concerned for the laptop but frankly, it's the remote I feel sorry for. Only yesterday it got its first bath.

Well, the computer's mine to do with as I will now. It's already missing seven keys and the webcam packed in years ago. However, I think it can still serve a useful life as a music player / video phone so I'm going to nurse it back to health. I've plugged it into the TV, downloaded the Ubuntu installation CD and put a copy of Terminator 3: Rise of the Machines in its DVD player to cheer it up.

It's two years today since we were married! 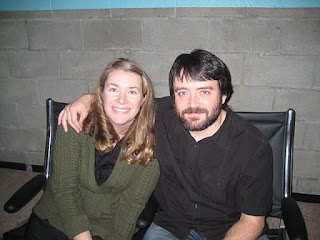 It actually seems longer than that, but in a good way.

As a special treat, Heather's friends looked after Owain 'John Connor' McFarlane while we had diner at the local Indian Restaurant.
Posted by John McFarlane at 21:11 No comments:

Week before last Owain was sleeping really well, taking 3 hour naps and sleeping in until 7:45am (well, that happened once). It got me thinking that maybe some new development was on the horizon and sure enough this week he has said a few new words! Seems like the whole talking thing is taking a really long time. I thought as soon as he turned a year old the language would just flow. It is the case with some kids but Owie is more of a mover than a talker. His words to date are George, as in Curious, botbot (bottle), water, car, bubble, Dada. Notice no "mama" Hmmmm...
Posted by heather mcfarlane at 07:45 2 comments: