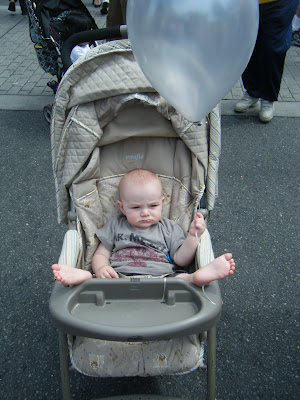 I think this may be my new favorite picture of Owain. We were at the seafood festival last weekend and it was a hot day and poor O was late for his nap but he sure is cute even though he was being a bit of a sourpuss. I just realized that I never followed though on the promised review of How To Cook A Wolf. Let's see if I can actually remember anything from 2 weeks ago. We got there at 6:30pm and were told that there was a 2 1/2 hour wait so we gave the maitre de our cell phone number and went off in search of drinks and an appetizer. We ended up just down the street at Opal, another fancy restaurant. We ordered an appetizer each and a regular portion of pork belly to share. That was delicious and it also came with trotter fritters (fried pig's feet) YUM! We still had some time to kill so we found a cafe that served beer and wine and then of course 2 sips in the phone rang, our table was finally ready. We sat down at a comfortable table but the restaurant is pretty small. It was all copper and light wood the lighting gave it a warm, cozy feel. The menu consisted of appetizer-like selections the idea being a table of four might share 6 dishes which is exactly what we did. Anne and I hogged the scallops and heritage tomatoes, we also had some pasta, paninis and a lot of wine because I can't remember what else we ordered. It was a lovely evening and I'm glad we decided to spend our rare night out with new friends and try a restaurant that would have normally intimidated me.
I must include one more picture of the wading pool. It would be remiss of me not to. 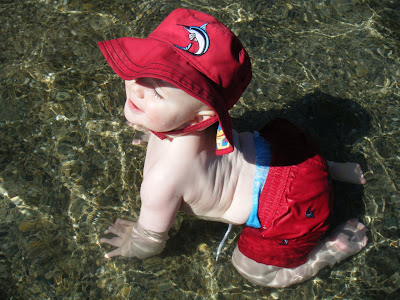 Posted by heather mcfarlane at 20:31 No comments:

Owain went for a dip in the wading (paddling) pool at Green Lake Park today. Owain loves the water.

Owain is now nine months old and had his well visit at the doctor's yesterday. The new stats threw me for a loop. 28 1/2 inches-50%, 21lbs 2oz-60% and head circumference is at 85%. The doctor put my fears to rest saying that because he just learned to crawl he's burning a lot of extra calories and we can expect another small dip when he starts walking. Sounds reasonable to me but I am going to start feeding him a lot more solid foods. I started last night with carrots. 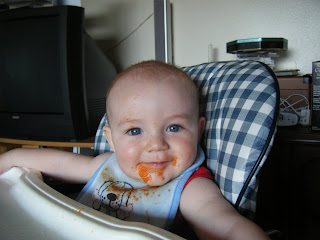 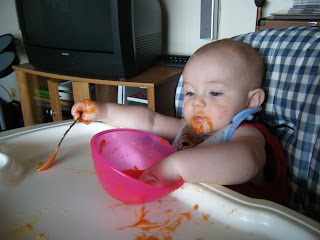 What a mess! In other news, my tryout for Wheel of Fortune did not go well. My name was never called so I didn't even get a chance to wow the judges with my sparkling personality:) We did get a lovely photo of the WheelMobile. 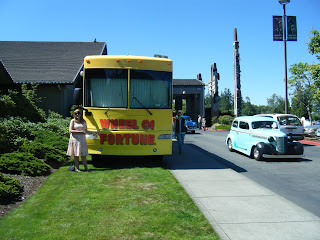 Tonight our babysitter is back from a 3 week hiatus so we will be hitting the town with friends Anne and Mike. We are going to a new restaurant called How to Cook a Wolf. Stay tuned for a review.

Posted by heather mcfarlane at 10:05 No comments:

I finally caught the camera-shy crawler burning up the carpet.

As I speak, he's wandering 'round the living room looking for things to climb on.

He can sort-of stand up for an instant.


He can also feed himself although this also is somewhat of a hit-and-miss affair.


Later today, we're going to Sequim near Olympic National Park so that Heather can audition for her favouritest TV show, Wheel of Fortune. Wheel of Fortune is hosted by mighty quiz-show overlord Pat Sajax. If you don't believe me, check out his no-nonsense website.
Posted by John McFarlane at 07:16 2 comments: 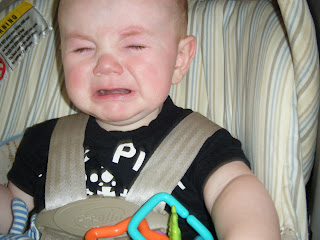 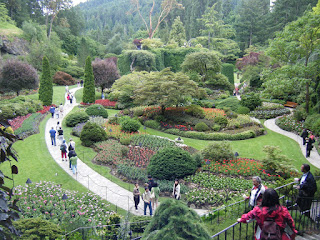 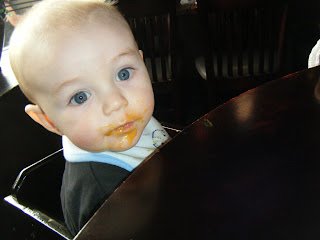 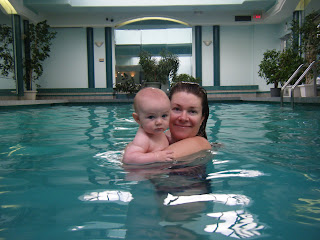 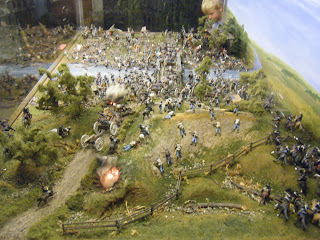 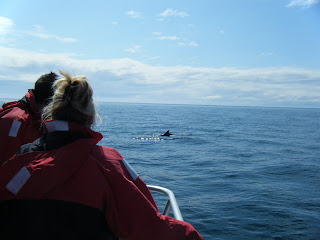