Heather's scan on Friday revealed a healthy-looking baby boy, so no need for any new clothes. I'm trying to calm her fears about rearing two boisterous hooligans - mostly by lying about my own childhood growing up with my bro.

On Saturday morning, Heather had to go to hospital because of gallstones. These she probably got because of being pregnant. Fortunately they went away of their own accord but were extremely painful for a while.

By the evening, she was right as rain and we went out with some friens to see Carrie Fisher's show, Wishful Drinking. It was quite an education. For instance, did you know she was married to Paul Simon? And did you know that there is no underwear in space? (Actually I knew that already from watching Moonraker.)

Now that we know it's a boy, Jeff has already suggested that I bring back the baby name poll from last time around. But I'm worried about what might happen. We might end up with a second Owain. Worse still, he could end up being called Colbert McFarlane.
Posted by John McFarlane at 21:54 1 comment:

Take Your Owain To Work Day

Yesterday was Heather's favorite day of the year. 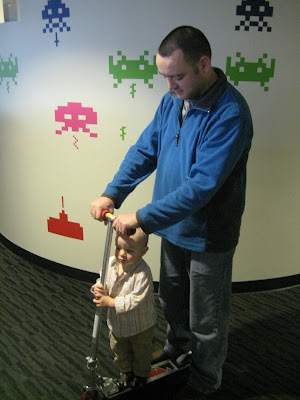 I get to look after the boy until three and she goes shopping. The baby had a fine old time. So many corridors to wander through!

This afternoon Heather gets an ultrasonic super-scan on the weenie-locator. Then we get to argue about names for four months. Hooray!
Posted by John McFarlane at 12:46 1 comment:

Our friends from Brighton, Lee and Becky are in the Pacific North West. 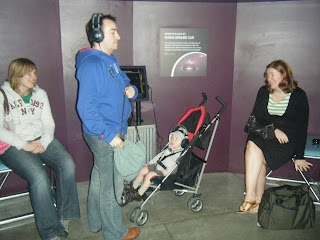 You might remember them from the party in Wales last year.

On Saturday, we went on the Duck Tour which mostly served to remind me how little we've explored Seattle since we got here. Owain was 18 months exactly. Happy half-birthday!
Posted by John McFarlane at 17:06 1 comment:

In the early hours of Tuesday morning, Owain escaped from his cot! He was having a particularly vigorous crying fit because he likes to get up in the middle of the night and we'd decided to put our foot down and let him cry it out. We were both horrified when he ran to us from the darkness of his room! He made quite a thump.

I've now converted his cot into a bed. He thinks it's great! 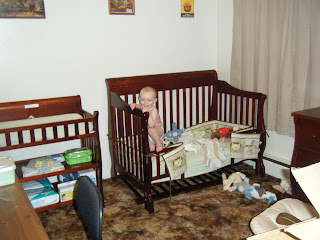 But he's having difficulty with the idea of staying there all night. And who can blame him. Still, he's been quiet now for about an hour. Lets hope he makes it through the night without wandering in here and waking us up!

And here's a random movie of him playing with our upside-down table.