That's right. Rocky is five today! For his birthday present, we thought we'd get him a handbag: 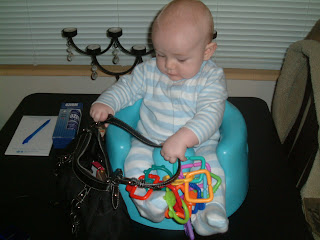 Actually, that's Heather's. It replaces the one she lost last week containing her driver's license and passport. Now with her identity lost, she lives on the outskirts of society, keeping to the shadows and paying mostly in cash. It's her birthday on Friday and as a special treat, I'm getting her a fake ID from some guy who hangs out at the local community college.

In case you've been living under rock, Wales won the Grand Slam! It appears that I can still listen to matches live on the radio without jinxing the team. However, I am never to watch another match on the telly in case that is what makes them lose.
Posted by John McFarlane at 08:21 No comments:

Last week, we trained Owain to go to sleep using the Cry It Out method. This requires a steely resolve and a bucket of fish. The most he cried was 25 minutes and on a couple of occasions, we've put him in his cot at 7.30 and he's barely whimpered. What a good baby!

Here are some more pictures. (I've added a bunch of links to my pictures page to make it easier to find all the baby pics. The rest of this posting is about sports and computers now so goodbye matriarchal hoards.)

On Saturday morning, I happened to be awake at 4.30; they haven't invented the And Stay Cried Out method yet. I put Radio Wales on to catch the last half hour of Rhod Gilbert and realised they were covering the Wales v Ireland Rugby match instead. So we got up, had breakfast and listened to the match. Wales are now proud winners of the Triple Crown and favourites to win the tournament and are tantalisingly close to winning the Grand Slam - about the best season I can remember. Just my luck it's all but impossible to watch the games here.

Later in the afternoon, I wandered to the supermarket with Owain and decided to venture in to the local computer shop. Everybody knows about their local warehouse-sized outlet like PC World or Fry's Electronics. People rarely spare a thought for the shabby premises just a few streets away from where they live. Drive past it and you'll probably miss it. There are no flashy signs, no shops fronts and certainly no customers going in or out.

ComProSof is a text-book example of the local computer shop. Check out the web site but remember where your back button is because this site was designed before hyper-links were invented. The owner sells consignments (which means you bring your old stuff in and they try and sell it for you). As a result, it's like an museum of obsolete computer parts. There's a shelf with about a dozen randomly assorted four and five-way parallel printer switchers. The hard-drives start at 4 gigabytes (which I think will set you back $5+tax) and I wouldn't be at all surprised if some of the software pre-dates Windows.

I feel that I'm going to have to build a new PC now just for the excuse to hang out there. I bought a hard-drive just for starters and spent a few hours yesterday and today converting the old Dell into a file and web server.
Posted by John McFarlane at 20:02 1 comment: