I finally decided to clear out the shed in the garden. It's full of odds and ends, all covered in leaves which are wound together with cobwebs. H was a bit concerned that I might get attacked by giant poisonous insects but I figured that they're only going to get more perky as summer draws near. Eviction time!

Sure enough, I came across a few bugs you don't normally see in the home counties. The first one to say 'hi' was Klaus, the scorpion. 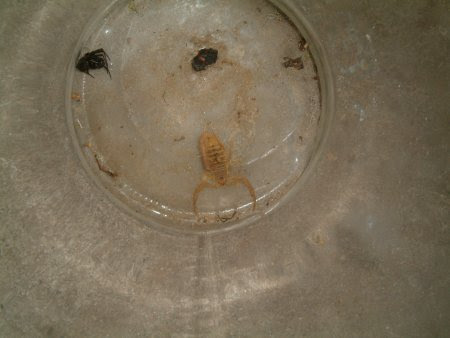 He's probably an Arizona bark - or maybe a Stripe-tailed - scorpion.

In a moment of comedy genius, I managed to tip Klaus' jar upside-down, down the back of a work bench which is where I subsequently found Heather:

As you can see, she's missing a limb (hence the name). Also note the red hourglass on her belly. A few birthdays ago, I was given a book called The Red Hourglass: Lives of the Predators. I couldn't remember the predator after which the book was named but I knew enough not to tickle her under the chin. It turns out that she's a black widow.

Here's another widow from inside the shed:

Can anyone think of a good name?

Finally, I found a rather large wasp-type creature hiding in/near a web in the corner of the shed. Naturally, she's called Blackie. 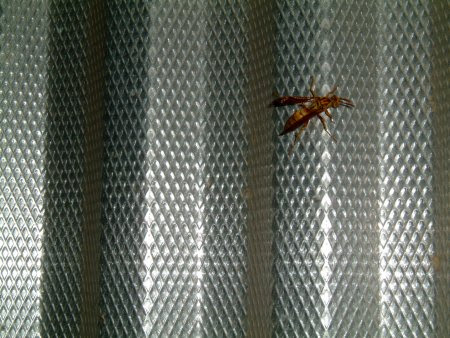 After I disturbed the web, she flew away, leaving me to study the strange honey-comb structure that remained. I'm not entirely sure what she was up to but she returned later to pose for the camera. She looked a little confused, possibly because I'd rearranged all her landmarks.

Sadly, I didn't spot any leprechauns.
Posted by John McFarlane at 20:30