It's all going on here today.

The car was picked up around midday so we had to get a cab to the Paediatrician's for Owain's one-month check-up. For your information, he is 10 lbs 8 oz after a good poop.

Most recently, someone came round to look at the stuff that needs shipping. Remember the nursery... 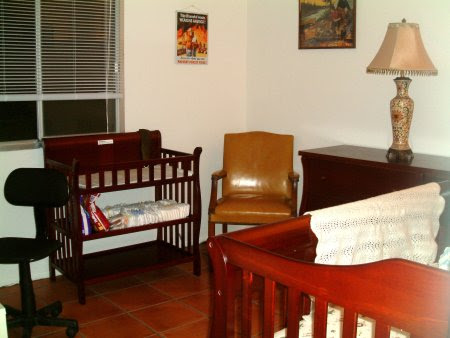 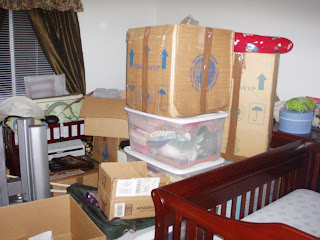 We're still in Tempe for a few hours longer. The flight to Washington is in the late evening. It's already delayed by 45 minutes. If it gets any later, we won't be able to pick up our rental car.

Did I miss anything? Oh yes, I've thrown all my flip-flops in the trash and lent my spare pair of gloves to Heather. She still claims she won't mind having weather again but reserves the right to complain at any point in the future.

Our hotel in Seattle has free wi-fi but I can't promise when I'll report in next, or where. It'll be from some happenin' coffee house full of shrinks and so-called gunge rockers, no doubt.
Posted by John McFarlane at 14:04