So Far in Seattle

We've been here a day now. The flight ended up being a couple of hours delayed so we didn't get to the hotel until gone 2am. Then Heather remembered we'd left the cot on the baggage carousel. So half the morning was spent returning to the airport to collect it, then getting fleeced by the Advantage Rent A Car agent who saw us coming a mile away.

By the time we'd eaten and made it back to the hotel, Heather was too tired to go anywhere. A sympathetic receptionist upgraded us to a room big enough to fit the cot in. Unfortunately, it was on a floor where the Internet was down. By the time that was fixed, it was too late to phone any landlords. It's thanksgiving on Thursday and that spills over into Friday. So basically, we've got one business day to find a place to live before I'm due to start work. It's going to be an early start but that's ok, we've got the world's best alarm clock!

When the baby isn't on the move or in a restaurant, he gets very tetchy so I decided to calm him down with a walk. We're in the Executive Pacific Plaza which is only a few streets from the waterfront so with a tight grip on the buggy I walked down the steep hill to Alaskan Way. In the 2000 feet journey, I passed 3 Starbucks. I even left the hotel via a coffee shop. 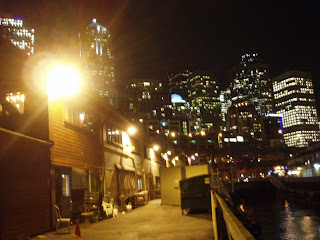 The waterfront is just the right amount of run down. I'd say it's roughly on a par with the Palace Pier in Brighton. There are touristy seafood restaurants, an aquarium and an arcade with an F-Zero cabinet!! 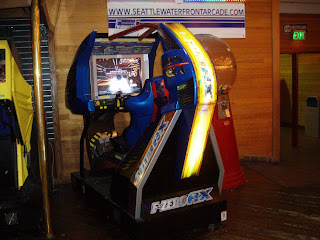 I used to wander into the arcades in Brighton just searching for one of these. I'd given up all hope of ever finding it. Not being superstitious, I don't see this as a very good omen.
Posted by John McFarlane at 05:03

So Far So Good. The cot on the carousel bit is always going to be one of those good family stories you can laugh about round the dinner table in years to come - trust me! At least Owain wasn't in it - was he? Looking on the hotel map, I was trying to guess where Surreal is and there is a bit to the north west where the railway line runs along between the water and a road with buildings.
Anyway, good luck with the house hunting and in the meantime sit back and enjoy Thanksgiving.
Love Grandma