So sorry I've not posted for a while but I'm back in the Valley of the Sun and straight away house sitting for friends of Heather's who are on holiday in Costa Rica. They own a condo with a communal pool which is empty all day. 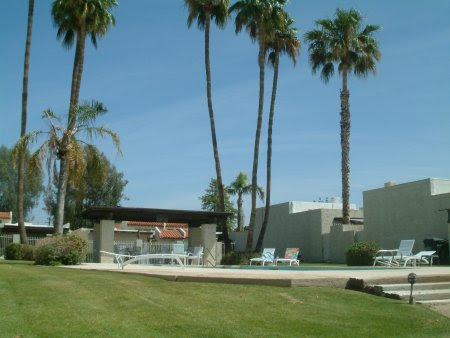 Did I say I was sorry? I lied.

I also at last got to meet Heather's best friend, Kristi and her youngest Isaiah. Heather looks at him with a mixture of adoration and barely stifled terror. I figure that this is about the right attitude for someone with a human parasite of her own growing inside her. Next week, we get to find out what sex it is. Heather is very excited. I'm dreading it because until now, there has been an amnesty on name-calling.

The journey to the USA went much as planned. The lady at immigration told me that it's impossible for me to apply for a marriage visa while I'm here. She wouldn't explain why, only pointing to a passage in the visa waiver small print which I've read a dozen times which states that I cannot change that status of my non-immigrant visa (something I don't have and don't intent to get). I tried to get her to explain but I failed.

I was further told that pretty-much everything that I'm doing is illegal but with no effort made to arrest me or otherwise act on this unjustified assertion. This is pretty much what I've been led to expect from accounts given elsewhere on the web; as in the UK, politicians want to sound tough on immigration for political reasons but have no choice but to welcome immigrants on sound economic grounds. That said, I'm going to bear it in mind when Heather and I begin the process of getting a visa following our marriage later this month. My suggestion of a drive-through Elvis affair in Vegas is currently winning through.

Today is the 5th of May. This is a Mexican piss-up celebrating the killing of some French dudes. Perhaps the French dudes made the mistake of using rubber bullets. These only make Mexicans more madderer. I shall endeavor to drink lots and report back.
Posted by John McFarlane at 14:16

Oh yeah, after a grumbling time in Aunt Chilada's, we ended up in an Irish bar near Jamie and Gwyn's place where the CD player was singing lots of jolly songs about how it's ok to be a terrorist so long as you're on the right side.