Quite a bit to tell since last post. The funeral went OK. I had to do my eulogy whilst holding Owain who spent the service throwing plastic animals around. Outside, Dad was almost buried with two sheep and a horsie. 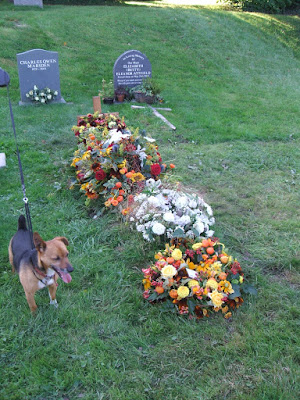 The remainder of the trip was a bit more relaxed

which was a good thing because the flight home was tough for the boy. He was very good overall and even let me watch some movies over the Atlantic. I've been meaning to see Moon since it came out, but not really for fun, so I was pleasantly surprised at how watchable it was. The latest Terminator - on the other hand - should have been sub-titled: 'Metal vs Wood'. I suspect that Christian Bale was told not to outdo Arnie's delivery.

No new baby yet. Today is the due date and there's little sign of an appearance so far. To paraphrase Heather: a watched pot belly never boils...
Posted by John McFarlane at 07:06