I managed to get in a match or two of the World Cup last weekend in Prescott, thanks to Jim and Setanta Sports.

Setanta is an international network I'd never heard of before with channels in Great Britain and Ireland as well as America and Oz. The US operation is presented by a team of mostly Irishmen. I wouldn't say they had a bias or anything but they knew more about the Namibian side than they did about the Welsh. (Ireland beat Namibia by an unimpressive margin on Sunday BTW.)

Elsewhere in France, the not-much-hyped game between the US and England went well, i.e. America only lost by ten points to twenty eight. The locals here seem disappointed when I tell them the score despite only just learning that they have a team at all (or, for that matter, that England are the World Champions). When asked for his comments on the result, President Bush said, "we're kicking ass".

The Tri Nations teams all beat their opponents by a factor of between five and thirty as widely predicted. Wales won by a fair gap to Canada after a poor start in the first half and a steady stream of replacements in the second. Even Scotland had an easy go of things against Portugal.

The surprise match of weekend turned out to be the first, in which the hosts fell to Argentina. The upsets always seem to make the best viewing. I expect that's because no matter how far below par the favourites are, the underdogs always have to put on a hell of a show to come out on top. That's why Wales vs Australia is going to be such a joy to watch at 5:30am on Saturday. We're going to kick their asses all right.

While I was in Prescott, I also acquired Jim's old bike. It's been in storage for about twenty years now but I am assured that it was a fine vehicle in it's day. See for yourself. 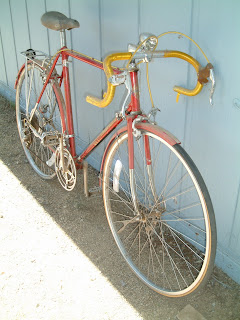 I've replaced all the rubber parts which were perished and have given it a can or two of lube. It still needs a lot of work but for now it gets me to the post box and back. Nifty eh?
Posted by John McFarlane at 22:49

Sports? cycling? Running errands? I've been reading the wrong guy's blog all along.

Ah, seems you've got the wrong guy too.