I've no idea what the 'P' stands for but this is the name Owain uses to refer to his Uncle Rob. Rob flew over to visit a couple of weeks ago and we met him on our way home from Arizona. 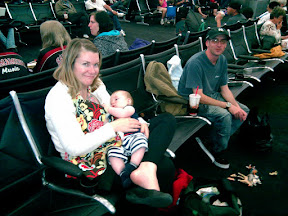 He was an instant hit with the boys - mostly because he turned up with a ready supply of dinosaurs. He also did his share of babysitting on the evenings when he wasn't terrorizing Ballard's bar staff.

When Heather flew out to see Jim, Owain kept saying: "Mummy plane? Mummy plane?" Well since Rob caught the Amtrak back to LA on Wednesday, it's all about: "P Robert train?"

Apparently, he didn't sleep the whole journey because a fat guy kept falling asleep on him but he managed to take some pictures along the way.

Here are some photos which also include Owain's first Easter egg hunt.
And here are some older photos of Owain expressing his deep love for prehistoric animals.
Posted by John McFarlane at 11:55