Posted by John McFarlane at 14:50 No comments:

This morning I was walking the dogs around the block when I noticed that rivulets had formed by the roadside. I tutted disapprovingly at the waste of precious desert tap water before I remembered that it had in fact rained this morning for a whole hour! I'd forgotten what roads look like after a downpour; it's normally so dry here.

Not so back in the good ol' U of K. It's wet there. It's been pissing down for weeks. Britain's up to its necks in what the marketing department has asked me to refer to as 'aqua'. It's clearly kicking-out time on a Friday night in the bit of heaven over the British Isles. Yes it's wet.

The truth is that books that are to blame for his holy wrath. The UK is a literary hell-mouth with a long tradition of pissing off the almighty in print. Whether it's Denis Wheatley, Jackie Collins or Salman Rushdie you can be sure that Britain's blasphemous book writers are the envy of the world. Take this concise book review:

"Harry Potter is an evil book intended to trick people into believing that witchcraft is pure fiction. This way they will be off their guard and will more readily begin experimenting with things like Dungeons and Dragons and the like. Rowling may have written those books, but she didn't author any of the HP books. The devil is the one and only author of those books. Rowling created HP by a process known as automatic writing which is a form of channeling. After each sessions she probably had carnival relations with him."

Guess we're all going to hell in a tea cup.
Posted by John McFarlane at 13:51 1 comment:

Heather and I did our childbirth class today and that's the name of a breathing exercise we have to do during labour. And I do mean we.

I've always suspected that the father's role throughout the whole gory show is mostly to not block anything such as medical experts, emergency parking spaces or birth canals. This should be a simple task except people like me have to do it. Hence a room full of men learning just how many words you can combine with vaginal. It wasn't always this way...

Imagine that you're Dirk Bogarde in Doctor in the House and you've been called to a maisonette where a woman is in the late stages of child birth. Now imagine that the husband is actually at home for some bizarre reason. He's doubtless flapping around like a headless chicken and any first aider will tell you that the first thing you need to do in this situation is clear the area of any hazards quickly and permanently. How to do this? You tell him:

"Quick, I need a clean towel and some hot water!"

That should keep 50's man busy for at least thirty minutes.

Of course, I know full well that these items are completely useless for childbirth. The baby should not be bathed for at least an hour and we now know that soft fabrics lead in all cases to SIDS. Clearly this sort of cheap trick is not going to work on 90's man who is far more clued up on 'lady issues' such as pregnancy and emotions.

And while the delivery room may be no place for someone with such a low pain threshold, male presence is almost unavoidable nowadays. Thus damage limitation is the purpose of the class I attended today and here are a sample of the tasks I must perform at each of the stages of labour:
Now I just need to decide between a natural birth or a heavy course of smelling salts.
Posted by John McFarlane at 00:57 2 comments:

There was some more weather this evening! This time, I used Rob's old camera and took some movies from which I was able to grab these stills. Here's the best one: 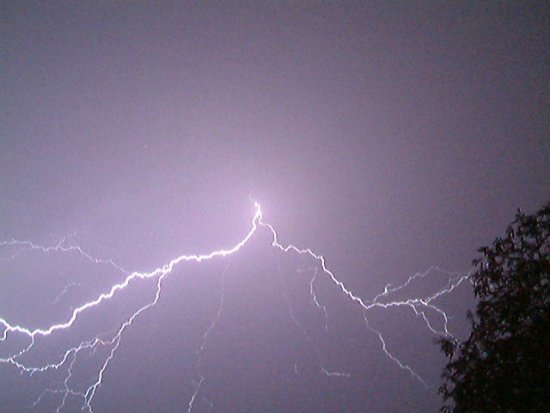 And here's the movie:


This evening, we saw SiCKO, the fourth Michael Moore documentary film I've watched and probably his best so far. It's factually correct whilst being the most (arguably only) left-biased thing I've seen the whole time I've been here. It makes the NHS look amazing! It also reveals that Tony Benn is turning into my Dad! He has the same style of ranting, the same exaggerated mannerisms and even the failing fashion sense. I almost feel sorry for Hilary.
Posted by John McFarlane at 02:17 No comments:

It's monsoon season! It got here late this year but now that rain's pissing down for all it's worth.

The lightening's pretty frequent and Joe got all scared earlier and wouldn't let us put him down. He even wet himself, proving the idiom that it never rains.

After my success on July 4th, I thought I'd use my new tripod to see if I could catch some lightening on camera. Obviously that's not as easy to do but I figured that if I just kept clicking, I'd catch something. And look at the marvellous results! 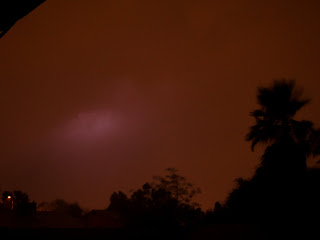 Pah! And I missed The Colbert Report because the storm killed the satellite signal. :(

In other news, I'm having my biometrics captured! The letter arrived today and the appointment is early next month. The only things that might cause them to reschedule are 'open wounds or bandages/casts'. Guess I'll be showing up rough shaven.
Posted by John McFarlane at 21:41 No comments: 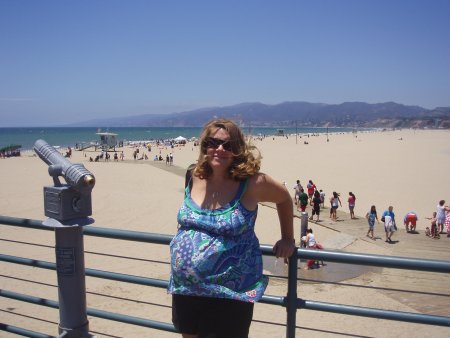 We finally went to see Knocked Up yesterday. It was very funny and it rang true for this slightly bewildered father-to-be. However, I expected it to be funnier still. I only last week got 'round to seeing The 40 Year Old Virgin which is by the same director. It received a lot less hype and had me chuckling all the way through so the latest movie was a slight let down. The birth scene had Heather suitably terrified. I had to take her to see 1408 today to take her mind off it and it made her scream out loud! Result!
Posted by John McFarlane at 16:46 No comments:

Well here we are in Southern California! Heather drove all the way from Prescott yesterday with only two or three breaks.

We're staying in a motel in the City of Orange where H used to live. Last night we ate at Duke's on Huntington Beach which was very expensive and very tasty. This afternoon, we lazed by the pool and now we're off to get some Mexican food even though I have bad heart burn. I just don't care, me! Anarchy!!
Posted by John McFarlane at 15:15 No comments:

The Rodeo was great fun. I think I would have preferred it much more if I was about a quarter of the age. Still, now I know that I've seen real cowboys and cowgirls doing what they do best: diving onto baby cows from a horse, racing round barrels and falling under the hooves of wild, pissed off bulls.

Here's a picture of two cowboys jumping on a baby cow that's been tied up by another two cowboys riding grown-up horses. Say what you like; it's still fairer than bullfighting. 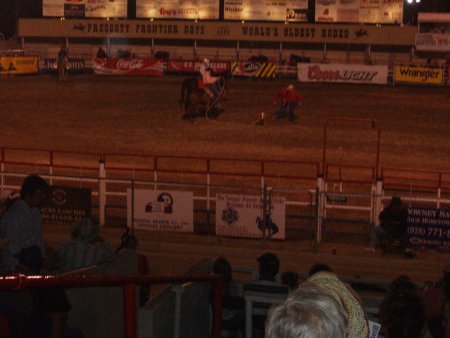 Whiplash the monkey was a bit of a let down. He's basically strapped to a sheepdog that's being directed by a shepherd. Our simian friend supposedly performs the 'Indian hideaway', leaning fully to the side of his 'steed'. It looked more like he was trying to free himself. Think 'organ grinder meets One Man And His Dog' and I'm afraid you've got Whiplash.

As for the rodeo clown, this mirth-maestro specialises in politically charged, observational comedy. For example, one of his blasts involves the observation that Osama and Obama both start with an 'O'. Oh, how I cheered as the bull went for him!

Yesterday was the 4th of July, better known State-side as July 4th. Jim's efforts to find a nice spot from which to view Prescott's fireworks were scuppered when we were moved on by a curt motorcycle officer, charged with protecting us from spent rockets. I felt like a real wild-west outlaw, holding my empty Guinness can as I folded up the chairs.

We eventually found a government sanctioned vantage point on a sports field at Embry Riddle Aeronautical University where I managed to record images of the fireworks. Might I be the first of about ten thousand people to publish a nondescript movie of some 4th July fireworks on YouTube...

And here are some blurry pictures.

Being British, I wailed and gnashed my teeth throughout the whole humiliating spectacle.
Posted by John McFarlane at 15:51 1 comment:

We're back in Prescott where it's all going on this week.

There's a craft fair here selling all forms of poorly conceived ornamentation. If your house is lacking in kokopellis or you've dropped your unbreakable crystal nail file on a hard surface then hurry on down to the Courthouse Square while stocks last.

Whiskey Row (a line of old bars opposite the square) was closed off on Saturday for live music by local acts. It reminded me of the gigs in Chepstow at the racecourse and down in The Dell with dozens of bored looking teenagers stood at the front of the stage, waiting for the local middle-aged rockers to play a song they actually recognised.

Yesterday was Daniel's birthday. We had breakfast at a friendly little cafe called Molly and Wally's, saw Live Free or Die Hard at the cinema and had dinner at Red Lobster. I think I've officially watch enough action movies to last me a lifetime now. I haven't had enough seafood however and can't wait to sample the restaurants in SoCal. (That's Southern California for those who know).

Tonight, we go to the Rodeo! In preparation, I'm getting tanked up on beer. I've forsaken my shorts and flip-flops for unsuitably hot jeans and boots and I'm ready to kick some shit! I'm looking forward to the mild scenes of animal cruelty and can't wait to cop an eyeful of the Rodeo queens (who look pretty convincing, judging by the promo pics). However, I'm most excited about seeing Whiplash - one of the worlds most talented (and oldest) cowboy monkeys. He's 20 years of age, rides a dog and herds sheep for a living. Go Whiplash!
Posted by John McFarlane at 16:21 No comments: