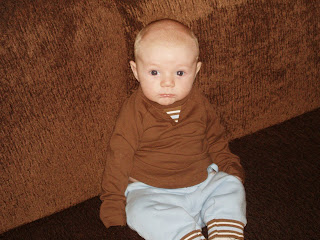 I decided to post about Owain's checkup today since John is out at Radioshack, yet again. Owain is really 10 weeks old as of yesterday but it took me a while to get settled enough to find a pediatrician. His new stats are-weight 14lbs 6oz, height 24 1/2inches, and head circumference is 16 1/4 inches. He is above average in all areas especially weight where he falls into the 90th percentile. He had to get his first immunization shots today and he cried quite a bit. I have a feeling it may have been the nurse's cold hands that kicked off the screamfest. He is napping now after having a dose of Tylenol. He was not a happy bunny after those shots. I must admit that I have been an anxious wreck since last night anticipating this Dr's visit today. Thank goodness it's over! At least for 2 more months anyways.
Posted by heather mcfarlane at 17:25 3 comments:

I got around to storing all the photos we've taken in the past couple of months. 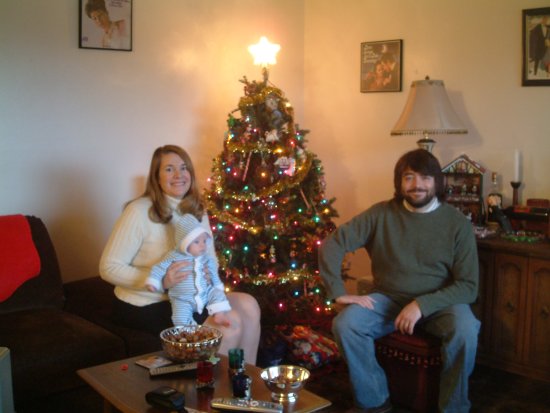 Posted by John McFarlane at 23:24 No comments:

Sorry to all you baby photo fans out there. We've taken quite a few recently but with one thing and another, they're not on the web yet.

Last weekend was quite quiet ... I think. I can't really remember. We took family photos by the tree and probably did some shopping and some more unpacking.

Monday was the office party and guess who won the grand raffle prize?!? I did!! You could have fooled me. It's one of those novelty controller video games called Rock Band. It comprises a pretend guitar, a set of pretend drums and an actual microphone. These, you plug into your XBox and then pretend that, not only do you have a life, but you have your own rock band to boot!

It quickly became apparent that this game is hot property as people offered to exchange it for the Sony PSPs and iPod Nanos that they had just won. Perhaps foolishly, I decided to hang on to it. Most foolishly because I didn't have an XBox to plug it into!

Heather suggested that the only way to justify getting a new games console at this stage was to call it my Xmas present. This was a cunning move on her part as Xboxes cost more than I've spent on her in our entire relationship. And so it was that we went to Best Buy on Wednesday and bought not only an XBox 360 for me, but a Hi-Def TiVo for her. Ever since, I've been behind the the TV in cable heaven, trying to hook up all of our gadgets without blowing any fuses. Even the cable engineer spent an hour there today trying to find our HBO.

Rock Band is suitably silly. The basic idea is that you spend the time it takes to learn how to play a musical instrument but instead, you spend it you just press buttons or hit pretend drums in time to a beat whilst staring at a TV. It's actually quite good fun although I haven't got my hands on the microphone yet. Heather sings the songs so she can hold the baby. I 'strum' along on what is bascially a guitar-shaped joystick.

So there you go. After years of shunning Bill Gate's and his evil empire, I've got hundreds of dollars worth of frivolous, Microsoft-branded tat taking up precious space in my living room. At least I'm supporting my local economy. In fact, when I wanted to find my nearest video games store, I typed "xbox" into Google Maps. I only got one result back.
Posted by John McFarlane at 16:28 No comments: 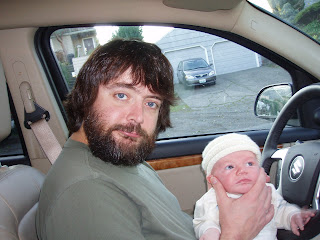 Anyway, here is the news:
Posted by John McFarlane at 22:32 1 comment:

He's been able to smile for a long time but it's becoming less random now. This movie was taken a week ago...