Do you remember me mentioning Whirlyball last December? Well, all of us Surreal programmers went back to the Edmonds Whirlyball Center yesterday ... and my team won! This was once I had figured out that my Whirlystrength lies in avoiding the Whirlyball itself at all times and instead obstructing the other team's Whirlybugs by loitering under our goal, driving slowly and occasionally cutting in front of other drivers ... so basically my normal driving style.

In other news, I invested in a new bike last weekend. 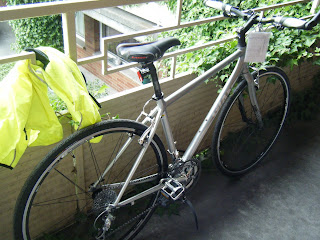 It's a Giant FCR 2 and it's sort of half-racer, half-mountain bike. I've ridden in to work on it three times so far. I'm going to try for the whole four days this week. I don't feel any fitter yet but my legs ache all the time. So that's good.

To our surprise, Heather managed to sell Jim's old street racer on Craig's List for quiet a few notes. I'm glad it's gone to a good home; the frame was too big for me and it was starting to seize up.

"Wait a minute, Whirlyjohn. Did you say four days?" That's right. Friday July 4th is a holiday and to feel better about not splurging out on a bicycle, Heather has splurged out on a holiday to Victoria on Vancouver Island. Activities involve whale watching and teaching Owain to swim in the hotel pool. Can't wait!

Finally, Owain started crawling on Thursday afternoon. I tried to film him at it yesterday but he wasn't in the mood. So far, the best way to get him to crawl in any particular direction is to place something dangerous or delicate/expensive there. Better still, encourage him to move in the opposite direction.

Heather is now all concerned that the flat isn't baby-proofed which it certainly isn't. We've started putting down obstacles between him and electrical outlets, easily tippable furniture and glowing hobs supporting rusty iron pots painted with lead and full of boiling bathroom bleach, under-ripe fruits and vegetables (which aren't properly liquidized) and sharpened bamboo shoots. This only seems to encourage him.
Posted by John McFarlane at 15:37 No comments:

Andee and Francisco brought thier sweet baby girl Isabel on an ambitious road trip from Orange County, CA all the way here and also made some other stops to visit family along the way. Here is Isa with Owain's foot creeping closer and closer. 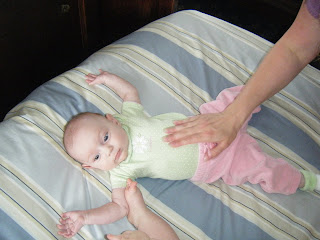 She is a lovely baby and it was a lot of fun having them visit. We went to Volunteer Park in Capitol Hill near the bed and breakfast they stayed at. 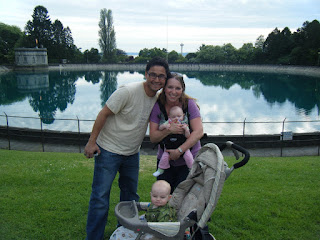 On Tuesday night we ate at the Fisherman's restaurant down on the end of pier 57 and then Wednesday we checked out Pike Place Market. It's hard to believe that I've lived here for 7 months and haven't been to the top tourist attraction in Seattle, well maybe 2nd to the top, let's not forget the fabulous space needle. Here are the rest of the photies.

Posted by heather mcfarlane at 21:43 No comments: 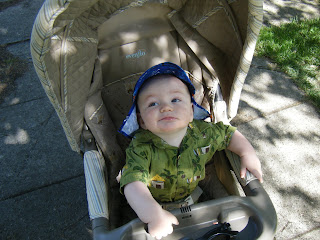 Lately Owain is getting restless indoors. It may be frustration at not being able to walk or even crawl yet but whatever it is the boy likes to get out of the apartment. We go for walks everyday and it reminds me of when I was pregnant and John and I would take my Dad's dogs for "walkies!" Owain's reaction to getting out in the fresh air is just like the little doggies. He gets really excited and can't sit still in the stroller.

The weather has finally warmed up here, to a measely 68 degrees, but I won't complain since the clouds have finally given way to the sun and 68 feels quite balmy to where we were a week ago. All of our walks in the sun during the past week have produced Owain's first freckle, a small dot on his right forearm. I slather him in sun cream but there's no denying the freckly genetics. His perfect complexion lasted 8 whole months!

We have visitors arriving tomorrow from Southern California, Andrea and Francisco and their new daughter Isabel. She is only 3 months old and I am thrilled to be around a teeny tiny baby again. We'll take loads of pictures and update after their visit. One more cute pic because I couldn't resist. 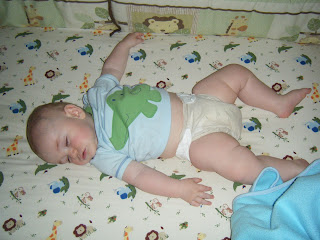 Posted by heather mcfarlane at 20:37 No comments: 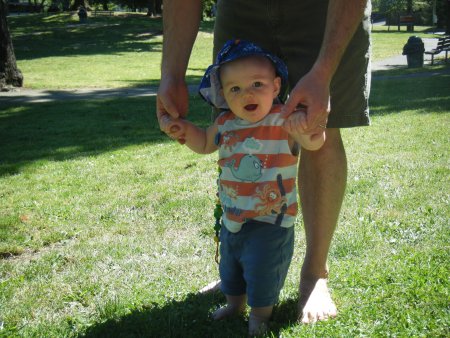 It was my first Father's Day on Sunday. I got a top and a framed picture of Owain and Me and a card of a donkey with bug eyes that Owain picked out himself. Heather bought a picnic hamper and we took it to the park. Here are our most recent photos.

I've started riding in to work. Last week it was sunny enough that I rode in twice. I'm still using Jim's old bike, yet I've managed to spend a small fortune in the bike shop down the road. Here are some pics from a week or so ago including my BMX Bandit Mad Skillz in a local supermarket car park.

Not enough snaps for you? Try this post on Bethany's blog which have a few pictures of the party. Turned out nice they did.

Finally, the latest, greatest version of my favorite web browser comes out today. Firefox 3.0 is released at 10am Pacific time and aims to set a world record for most downloads in one day. (This seems a little late as most of Tuesday has already happened in most of the world!)
Posted by John McFarlane at 08:50 No comments: