On the way back from Las Vegas, we dropped in on Jim and Daniel in Prescott. They're family now so it's about time that I posted a few photos.

On Sunday, to celebrate Heather's and my union we went to see Shrek the Third in the cinema and then had a meal at a Mexican restaurant called Garcia's. That's where I took this photo of (left to right) Jim, Daniel and my wife, Heather McFarlane. 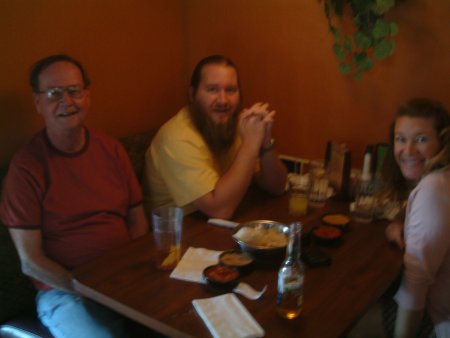 Posted by John McFarlane at 16:46 No comments:

The date I need to forget if I ever want my wife to not talk to me for a week is 18th May.

The place was the Little White Chapel Tunnel of Love at around 6.15pm. The temperature was about 100F and the only thing I was wearing that wasn't black was my tie. Nice!

The official photographs are at the developers here in Prescott right now. Hopefully, I will post them later today. I also took some pictures of our excursion.

We stayed in the Monte Carlo, played on the slots there and swam in all four of their pools. We also played roulette in Slots-A-Fun where I won $40 ... and only lost $20 - so two personal bests for me.

All in all, my first trip to sin city was a positive experience. I'd do it all again if it didn't involve polygamy.
Posted by John McFarlane at 12:26 1 comment:

As of yesterday afternoon, Heather is once more Miss McMakin!

I've popped the question and she said yes!!! Hardly much of a surprise as we were shopping for wedding rings when she found out that the divorce papers were signed. It won't be a very long engagement, probably until Friday and probably until somewhere like the A Special Memory Wedding Chapel.

Talking about rings, I feel somewhat robbed. The bride's wedding ring is supposed to amount to roughly a month's worth of the groom's wages. A few taps on the pocket calculator reveals that to be exactly $0.00. I'll tell you for nothing that you can't get many carats for that sort of money. Not 'round here anyways.

Anyway, time to go to bed. Big day tomorrow. I get to see the Hoover Dam and sip cocktails poolside in Las Vegas. Yum.
Posted by John McFarlane at 22:38 No comments:

I have at long last emerged from the cutting room after wresting with a characterful video editor called Avidemux. My advice for anyone wishing to use this charming piece of software is to cut early, save often and RTFW (that's short for Read The Fascinating Wiki). All the same, I narrowly prefer it to iMovie.

The result is a five minute video which I fully appreciate is only of any real interest to close friends and family.

Just be grateful that you didn't have to sit through the unedited version. It's thirty minutes long and the music track gave ME morning sickness!
Posted by John McFarlane at 17:06 No comments:

We went to the baby bump scan emporium today. The purpose of this visit was to flag any treatable developmental abnormalities early on...

Not as far as Heather's concerned. No. In actual fact, it's in order to have a ride on a $trillion winkle location system.

The news is that he's a healthy-looking boy, currently weighting 10oz and he's still due in early October, so for the next five months, we get to argue over boy names. Currently, it's looking like Rockford Elvis Chuck McFarlane but I much prefer Rockford Chuck Elvis McFarlane. 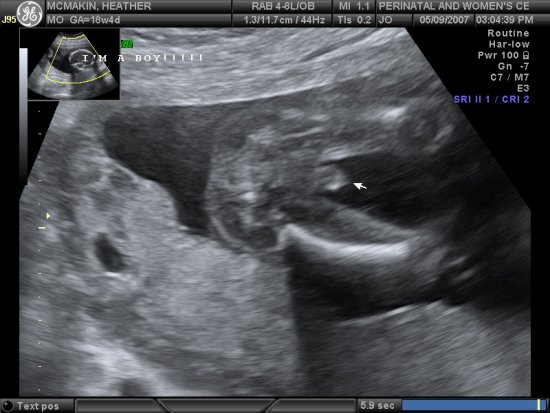 May this be the first of many embarrassing photos to haunt young Chuck through his teenage years.

I'm actually quite proud of the little chap already. Halfway through the session, the computer software hung. During the reboot I couldn't help noticing that the system ran on 2003 Server. That's pretty-much Microsoft's most stable operating system and my boy crashed it! Nice one my son! I'll have him causing kernel panics in OpenBSD by his fifth birthday.

Anyway, if you fancy trawling through 90 pictures of baby bits with a General Electric advertisement in the corner, be my guest. In the mean time, I've got to figure out how to rip the DVD for YouTube. There are some wicked cut-aways of his skull that make him look like something off of a heavy metal album cover.

Rock on Chuck!
Posted by John McFarlane at 17:32 No comments:

So sorry I've not posted for a while but I'm back in the Valley of the Sun and straight away house sitting for friends of Heather's who are on holiday in Costa Rica. They own a condo with a communal pool which is empty all day. 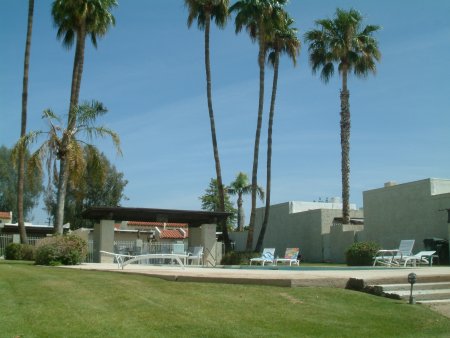 Did I say I was sorry? I lied.

I also at last got to meet Heather's best friend, Kristi and her youngest Isaiah. Heather looks at him with a mixture of adoration and barely stifled terror. I figure that this is about the right attitude for someone with a human parasite of her own growing inside her. Next week, we get to find out what sex it is. Heather is very excited. I'm dreading it because until now, there has been an amnesty on name-calling.

The journey to the USA went much as planned. The lady at immigration told me that it's impossible for me to apply for a marriage visa while I'm here. She wouldn't explain why, only pointing to a passage in the visa waiver small print which I've read a dozen times which states that I cannot change that status of my non-immigrant visa (something I don't have and don't intent to get). I tried to get her to explain but I failed.

I was further told that pretty-much everything that I'm doing is illegal but with no effort made to arrest me or otherwise act on this unjustified assertion. This is pretty much what I've been led to expect from accounts given elsewhere on the web; as in the UK, politicians want to sound tough on immigration for political reasons but have no choice but to welcome immigrants on sound economic grounds. That said, I'm going to bear it in mind when Heather and I begin the process of getting a visa following our marriage later this month. My suggestion of a drive-through Elvis affair in Vegas is currently winning through.

Today is the 5th of May. This is a Mexican piss-up celebrating the killing of some French dudes. Perhaps the French dudes made the mistake of using rubber bullets. These only make Mexicans more madderer. I shall endeavor to drink lots and report back.
Posted by John McFarlane at 14:16 1 comment: