Yesterday, I finally completed Zelda: Twilight Princess which was a relief. It's a bit of an epic to say the least and I need to get on with other stuff. I was hoping the other stuff would be Mario Party 8 but that seems to have gotten delayed ... Nintendo style.

To fill the gaping hole in my life, I've taken a few tentative steps towards learning the Python programming language. I'm dead bored of C++ and this seems easier to get stuff done in.

Today, we went to see a baseball training match between the Anaheim Angels and Oakland Athletics. I think this is roughly equivalent to a friendly warm-up. 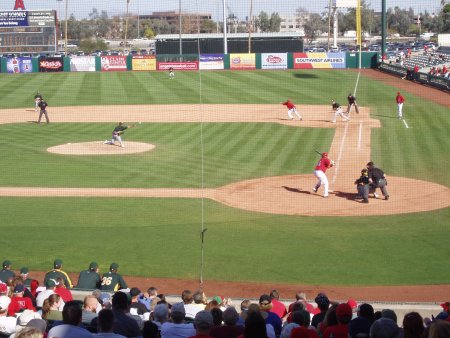 The Anaheim Angels are actually the L.A. Angels in Anaheim because they're from L.A. but they live in Anaheim, CA. But I saw them today in Tempe, AZ and the Oakland Athletics were the visitors because this is where the Angels train.